Lisbon by the book

Oh blue sky – the same as in my childhood-, Eternal truth empty and perfect! Oh soft Tagus ancestral and silent, Small truth wherein the sky is reflected! Oh grief revisited, oh Lisbon of times past of today! You give me nothing, you take nothing from me, you are nothing as far as I can feel. 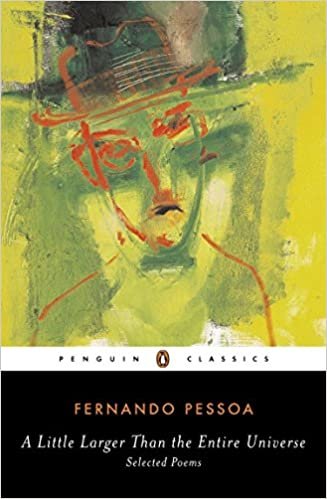 Writing obsessively in French, English, and Portuguese, poet Fernando Pessoa (1888–1935) left a prodigious body of work, much of it credited to three “heteronyms”―Alberto Caeiro, Ricardo Reis, and Alvaro de Campos―alter egos with startlingly different styles, points of view, and biographies. The numerous "heteronyms," are literary alter egos with fully fleshed identities and writing styles, who supported and criticized each other's work in the margins of his drafts and in the literary journals of the time. From spare minimalism to a revolutionary exuberance that recalls Leaves of Grass, Pessoa's oeuvre was radically new and anticipated contemporary literary concerns to an unnerving degree. Amazon

Fernando Pessoa is the most important portuguese poet of the 20th Century. Born in 1888 in Lisbon, Pessoa published only one book A Mensagem during his lifetime and most of his work was published after his death in 1935. Writing under 200 different heteronyms, Pessoa is still one of the most intriguing poets of contemporary world literature.

Our tour is a walk through Lisbon of the 1920s and 1930s, the city where Fernando Pessoa was born. We will see the city as the scenario of his literary production, we will follow the footsteps of the poet through the old quarters, the sites where he met friends and intellectuals, the ever-present bars and restaurants, the downtown as his daily office.

Lisbon Literary Tours is a side project of